We'd love to meet you and show you another way.

After 40 years in the dance business, we have seen it all. Having successfully competed in several genres, traversed both Franchise Studio models, starting our own small studio, buying a 3 story building and adding a restaurant and award winning nightclub, building a dance following that still exists after 30 years, growing the largest classes in L.A., we now are helping others achieve success. While this page may seem like we’re bragging, the truth is that through all of our travels around the world, our exposure to other fields like acting, Ice Skating, restaurant ownership, and several years performing around the world on cruise ships, we have seen many business models and have taken the best parts to show you HOW to greatly expand your business. I do offer you one promise. We will not seek to change your vision of what you want, we will only give you the tools to achieve your vision and possibly to expand it to greater success. I am the luckiest guy in the world. I have without question lucked into the greatest mentors such as Ron Montez, Nina Hunt, Walter Laird, Bob Medeiros, Vernon Brock, Roy Mavor, but also “masters” of dance, business, hospitality such as Joe Cassini, Lou Schreiber, Don Allen, & Jon Taffer among others…

Unique Skills, Unique Talents, Spectacular Results
Are You Happy With Your Current Situation? If You Keep Doing The Same Things, You’ll Keep Getting The Same Results 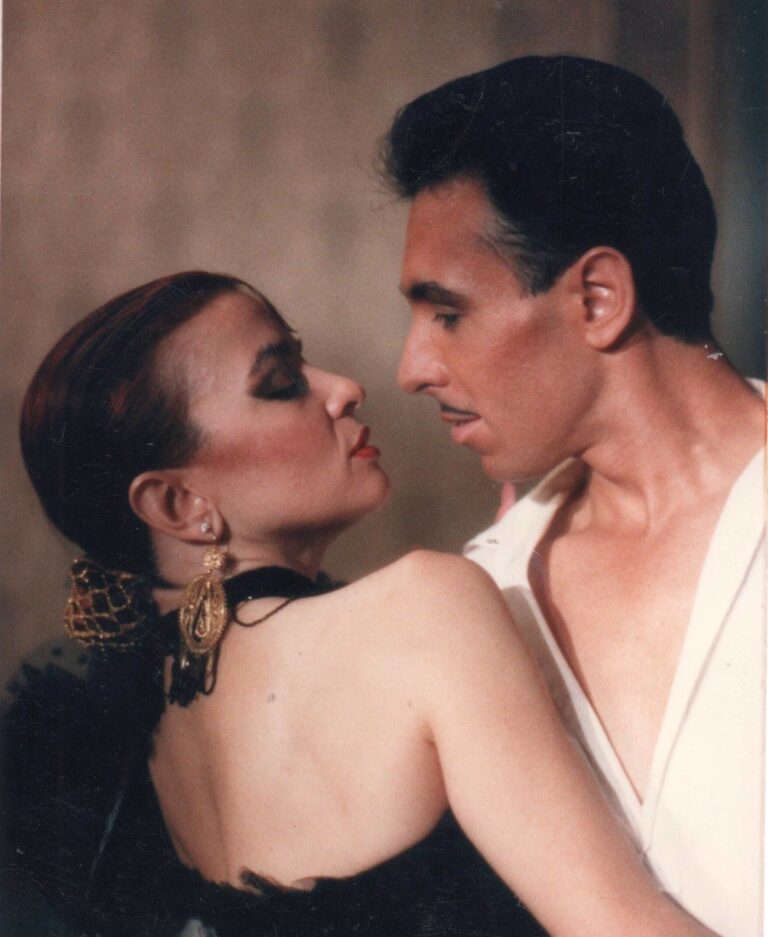 Currently filming an Independent film- God and Salsa, Choreographing and Appearing as a character based on us personally.  I was also Special Assistant Choreographer on the 1996 feature film Dance With Me. I also appear as a dancer in many of the scenes. In 2013, I was the “hero” actor in the UnitedHealthcare/AARP national commercial “Go Long” which ran for two years. 2 years later I came back and filmed a second national United Healthcare Commercial.   Choreographed and danced in the MTV music video Broken Wings by Mr. Mister, Also Chevrolet Impala and Toyota national commercials, and Hero in the DIM Pantyhose commercial for European distribution. 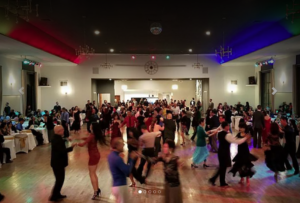 After running a successful 5,500 sq ft studio for 15 years I purchased a 15,500 sq. ft., 4 story iconic building and  established my own studio/nightclub/restaurant entertainment complex for 9 years. I have mentored the uber successful Studio 22 in Dallas, the legendary Westmor in L.A., SOHO Studio in W. L.A., Walk In-Dance Out in Torrance , Ca. Michael Kuka Studio in Hollywood, and By Your Side also in W. L.A. 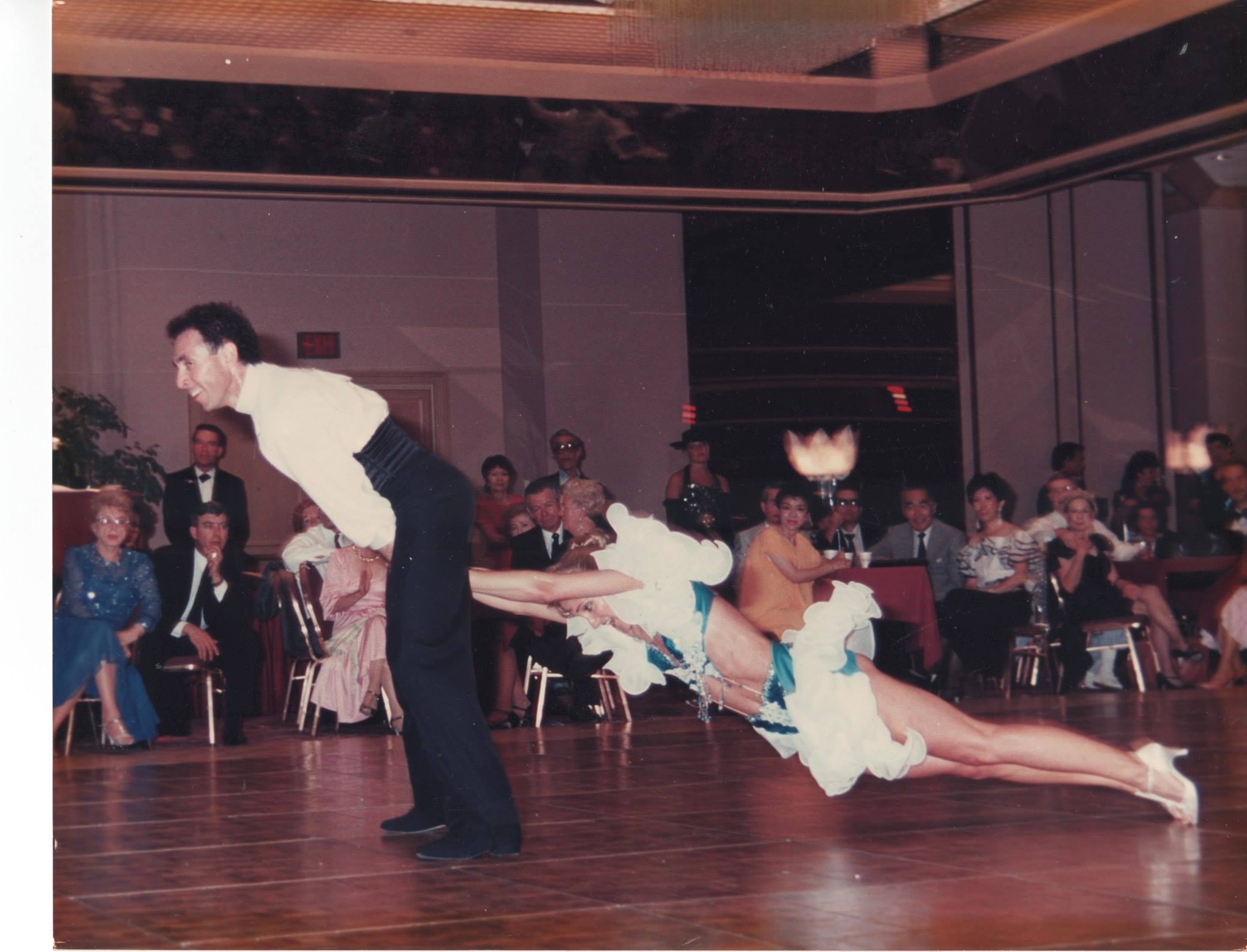 In addition to winning the US Pro-Am Latin A with my student and coaching my Latin team to the gold medal at USDC, nothing speaks louder than having regular classes of over 100 students who keep coming back for years. I have been an invited performer for the Dutch Congress in Slaghaaren, twice for the British Dance Congress in Blackpool, the DTV German Congress in Frankfurt, and many Swing or Salsa events throughout the US and World. 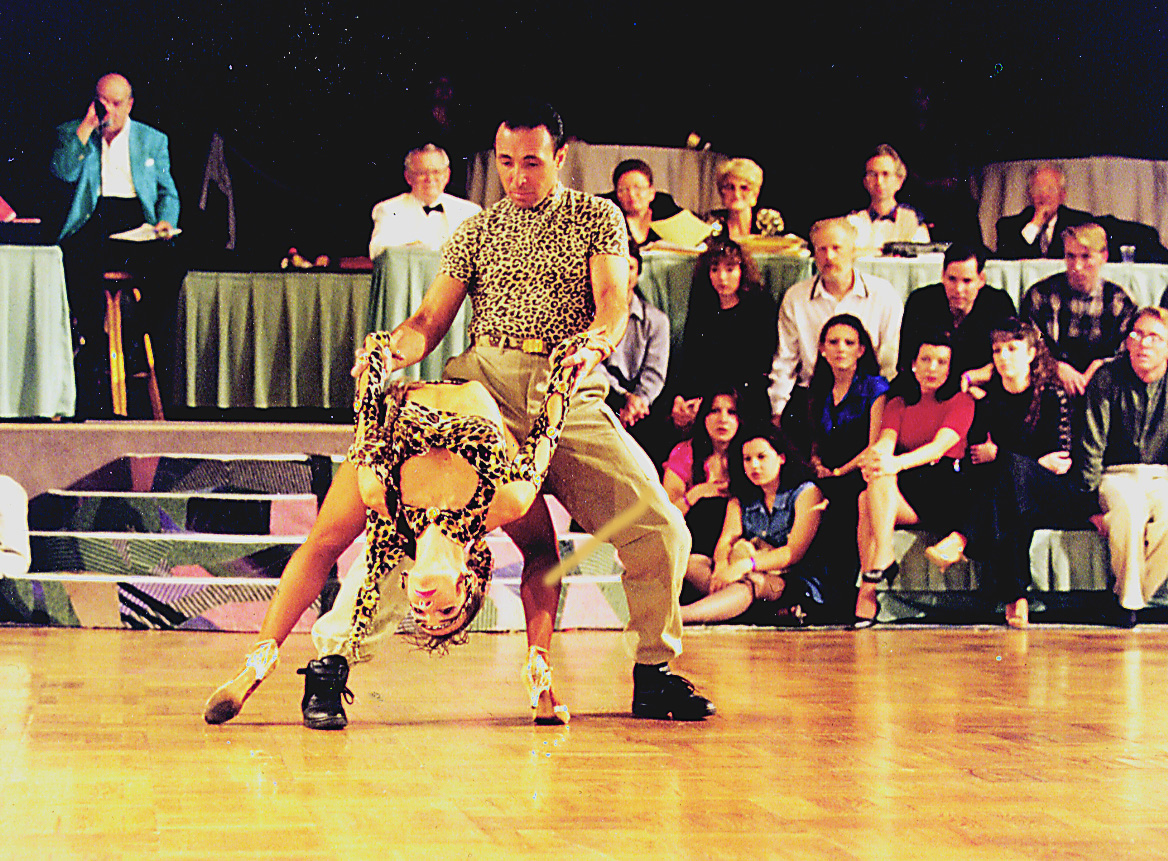 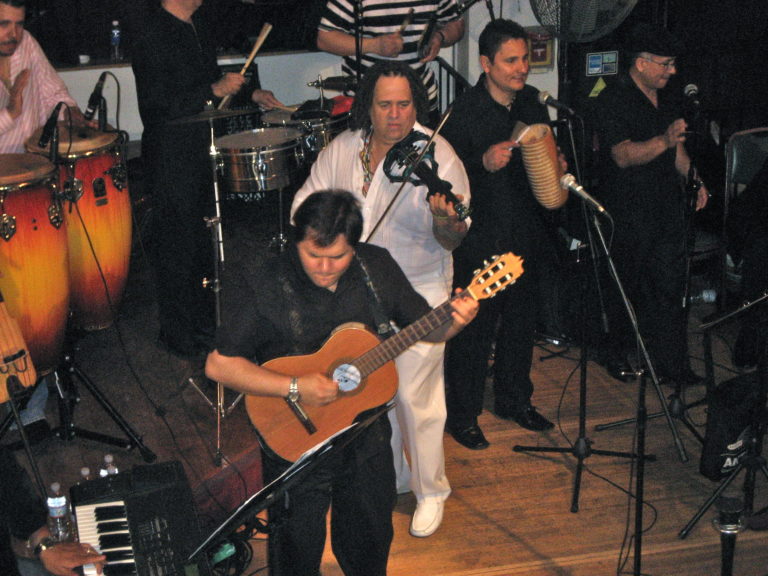 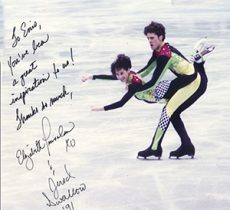 Examinations with Imperial Society of Teachers of Dance Associate (Latin and Ballroom), DVIDA, National Dance Teachers of America, USDTA, former Vice President of the Professional Dancers Federation, and 3 Time Feather Award Winner as Top Dance Teacher and twice as Hottest Mambo Dancer in the US. . Click for full CV

Currently filming an Independent film- God and Salsa, Appearing as a character based on me personally.

In 2013 I was the central actor in the United Healthcare/AARP national commercial “Go Long” which ran for two years. 2 years later I came back and filmed a second  national United Healthcare Commercial. Also appeared as featured actor in the Music Video Broken Wings by Mr. Mister, A Chevrolet Impala national commercial, and Hero in the DIM Pantyhose commercial for European distribution. I was also Special Assistant Choreographer on the 1996 feature film Dance With Me.

Having started at 17 in Costa Rican Folkloric dancing for fun, I  accidentally got into Ballroom and Latin dancing at the University of Southern California. Training under 7x time US Latin Champion Ron Montez I won the several California events over the next 4 years including the US Amateur Latin Championship, the Amateur World Latin Cup in Hollywood, and placed 17th at the Worlds in Stuttgart, Germany. As a professional I won the California, Florida, and Texas Rising Star Latin Championships, made the finals in several Championship events and the round of 24 in my first professional Latin in Blackpool. Stopping for 3 years to raise my kids I returned to win the US Rising Star Latin Championship in 1987. Retiring once again to run my studio, I entered the World Swing Championships on a lark and won the Cabaret Division, and made several finals in 3 divisions at the US Swing Championships. Won three Feather Awards two as the Hottest Mambo Dancer in the US

Breaking into the professional ranks I worked at both franchise chains to learn the business side of the dance business. Opening my first school in 1986 my formation team took the Gold Medal at the US Ballroom Championships. In 1990 I won the US Pro-Am Latin Championship Ladies A. In 1994 I won the first of my three Feather Awards as the Most Popular Dance Teacher in the US. By 1988 my studio now know as Let’s Dance L.A. was established in Alhambra, Ca. Known for having the biggest dance classes in LA for 15 + years, I soon purchased a three story building and expanded. Let’s Dance L.A. was lauded on the front page of the Entertainment section by the L.A. Times, and featured in spots by ABC Eyewitness News, KTLA News, Univision and Telemundo. My dance schools Let’s Dance L.A.  and Let’s Dance SP are still in existence after 28 years, but I am now living in Delray Beach Florida. While at the Granada, I was famous for nightly classes of up to 180 students.

Previous to opening my club I had been pioneering Salsa, Casino Rueda, and West Coast Swing all over Europe and the United States; Some of my special Salsa workshops and Congresses including: World Salsa Congress in L.A.; 2 European Salsa Congresses in Holland, 2 Blackpool-British World Social Dance Congresses, the German Open, Dutch Teachers Congress, Belgian Teachers Congress, Rome, London, Riga Latvia, Innsbruck Austria, Bratislava Slovakia, Barcelona Spain, a 4 week tour of the UK & Holland in December. We were invited to join the World Salsa Congress touring companies but declined. My salsa videos were for many years rated as a must have and were the 2nd best selling on the biggest video site.

In 2002 I purchased and opened a four story building and spent the next ten years developing the top salsa club in Los Angeles. During that time, the venue renamed as The Granada, Guitarras Restaurant & the accompanying dance studio- The club regularly featured Grammy Award winning performers, often had dances of over 700 dancers.

I began my third dance venture ExT Dance Consulting in 2013 to assist dance professionals in opening new studios and rescuing and expanding old ones.

As an organizer, I ran the first ballroom competition on Mexican soil- the Riviera Open- in 1981. From 1999-2002 I partnered with my brother for several luxury Swing and Salsa cruises from Miami to Puerto Rico. From 1989-2000 we ran two annual events that were the precursors to today’s major congresses. These hugely successful national events – Swing Jam and MamboMania ran for 10 years.  Currently Event Director of the Las Vegas Lights Dance Challenge.

From 1990-2006 I also was a special coach and choreographer in the Ice Skating world. Over that period I had 7 different couples at Winter Olympics in Ice Dancing at Lillehammer, Albertville, Nagano & Torino. I was invited to teach at the Olympic Training Center Elite Skater camps in Colorado Springs and the famed Broadmoor Ice Arena, Air Force Academy, University of Delaware and World Arena in Colorado Springs. During the telecast of the US Nationals, World & Olympic Champion Dick Button called me “One of the two hottest choreographers along with Twyla Tharp’s Keith Young.” 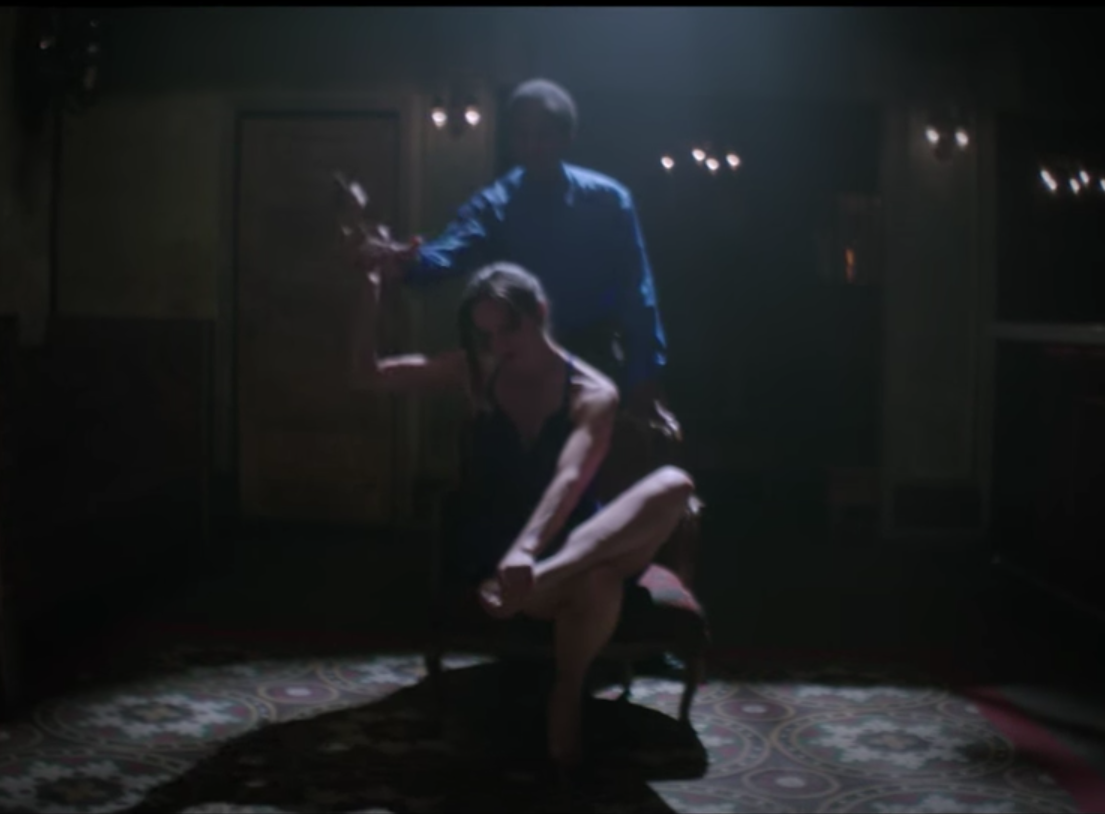 For nine months Terryl worked on the feature film Dance With Me. Terryl taught stars Kris Kristofferson, Chayenne, & Scott Paetty. She stars in the music video All the Days by Haerts. SAG Member 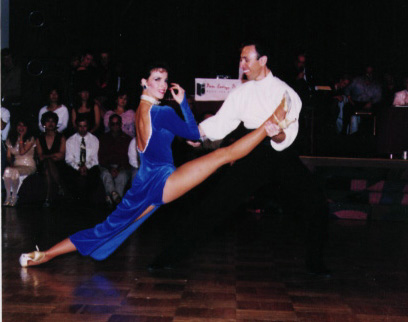 Terryl has this special ability. Teaming up with former British Junior champion Nigel Clarke after 10 years away, in only 3 weeks together, she made the final at Hollywood Dancesport and the 24 at Ohio in the Pro Standard. With Enio won the Cabaret Division at the World Swing Championships with no plan to even compete before hand. 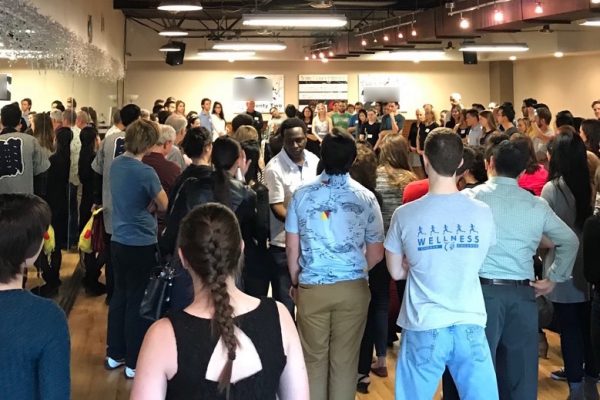 Terryl developed many of the front desk systems that we used at Let’s Dance and managed the mega studio that we mentored in Dallas for past two 1/2  years. Full certified Yoga instructor with over 20 years experience and certified in dance mechanics by the master trainer  Marie-Jose.

An Air Force Brat that grew on on Air Bases from Alabama to the Philippines Terryl is the daughter of an Air Force Colonel. Her dad used to Swing with her but she didn’t start dancing until she returned from the Philippines. After training with Fred Astaire she switch coaches to work with Roy & June Mavor. After winning theFred Astaire National Rising Star and finals of Florida State Rising Star Championship, she moved to California where she eventually partnered up with Enio. Although they only competed 6 times they were very successful with a World Championship, 2 second places, 2 finals at the US Open. In addition after the filming of the Sony Pictures Dance With Me, Enio & Terryl were hugely in demand all over the world and performed at many Salsa and Ballroom Congresses. Joining Let’s Dance in 1993, the classes soon exploded to over a 100 at a time, too big for a 5,500 sq ft studio. Purchasing a 3 story building and installing a restaurant, and club they soon had classes over 120 regularly and dances of 500-700- 3 nights a week. In 2017 Enio and Terryl were asked to come manage the hugely popular Studio 22 in Dallas that they had mentored from LA for 7 years. Terryl also worked with Ice Skaters in 1992-93

21 Days after forming their partnership Terryl and Nigel made the finals at Hollywood DanceSport, two weeks later, the quarterfinals at Ohio Star Ball. 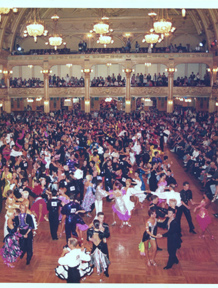 From the age of 15 Robert began latin training under Ron Montez.  Moving to England to train with Walter Laird and partnered with future British Star Karen Hardy for a very successful run 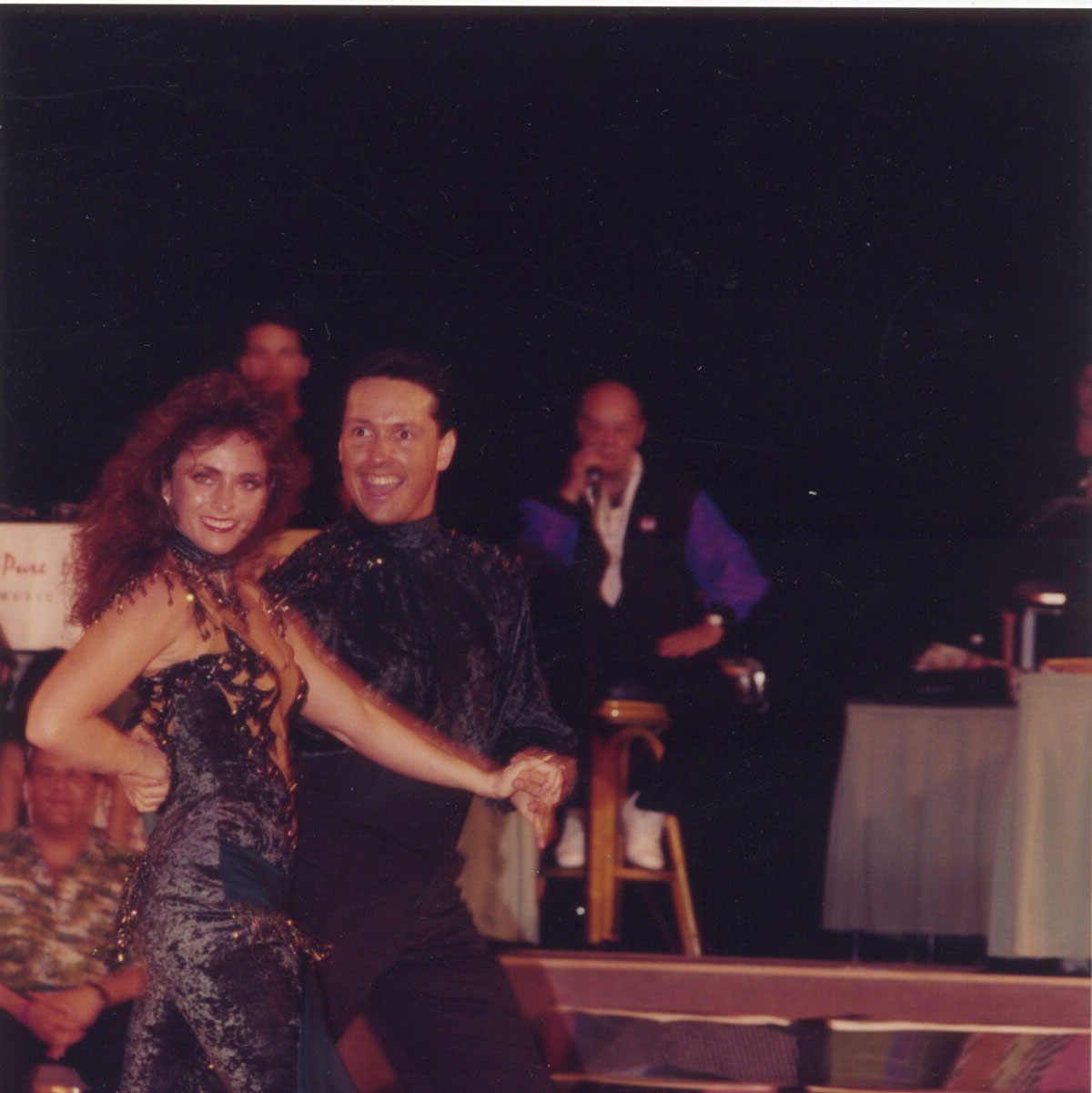 Returning from England Robert entered the Swing and Country World performing as a member of Midnight Cowboys. In his first US Swing Open he was 2nd and then won three consecutive titles with two different partners. Over the next 10 years Robert won 4 more Open Titles, dozens of national events was named to the Swing Dance Hall of Fame

Although you never really retire in the Swing World,  Robert created the Swinging At Sea cruise with over 400 participants. He regularly judges the Open and is an examiner for the Global Professional Dance Instructors Association. Robert was instrumental in building Let’s Dance L.A.’s Swing department. Robert has helped establish West Coast Swing In Brazil, Russia, Japan, Australia, England and much of Europe.

Not only has Robert won 7 US titles, but he has won with 3 different partners in both Showcase, Classic and Superstars. He is one of the “Super Seven” who has won both the Classic and Showcase Divisions at the US Open.